Stop us if you’ve heard this one before, but the Rams and Aaron Donald are still on the verge of completing an extension. Despite the lack of updates in recent days, the two sides are still on course for a deal that will make Donald the highest-paid defensive player in NFL history, a source with knowledge of the situation tells Mike Florio of PFT. 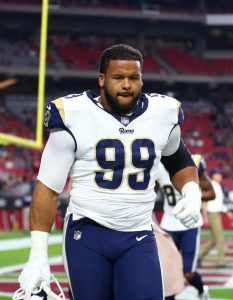 There has been talk of a deal coming together soon, but head coach Sean McVay also recently denied that a deal is around the corner. Despite the misdirection, the deal still seems to be something of an inevitability. Even though the Rams gave their defense the Hollywood treatment this offseason, they recognize Donald’s value and will likely find a way to give him a history-making contract.

When all is said and done, it is expected that Donald’s deal will average about $22MM/year with up to $80MM guaranteed overall. Of course, the overall guarantee is different from the fully guaranteed amount at signing, and that will be a key metric in evaluating the deal.