The Redskins have signed linebacker/defensive end Dadi Nicolas, according to a team announcement. To make room, the team has waived offensive lineman Alex Balducci. 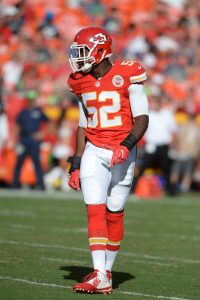 Nicolas, 26 in September, joined the Chiefs as a sixth-round pick in 2016, and the Chiefs soon announced their intention to move him from defensive end to linebacker. The position switch never quite off the ground, however, as Nicolas appeared sparingly in eleven games during his rookie campaign before a ruptured patellar ended his season. He hasn’t seen the field since.

The Chiefs actually completed a trade involving Nicolas earlier this year, sending him to the Browns in exchange for tight end Randall Telfer. That deal was later voided, however, and though no specific reason was given, failed physicals are known to regularly cancel transactions. Kansas City subsequently waived him, leading him to the Seahawks in May. However, he was released one month later.

At 6″3, 225 pounds, Nicolas could see time at either linebacker or defensive end for the Redskins, if he makes the roster. The Redskins edge rushing crew is headlined by Matthew Ioannidis, Jonathan Allen, Ryan Kerrigan, and Preston Smith. Nicolas will fight for a spot in reserve, alongside new outside linebacker Pernell McPhee.