Former Eagles and Browns linebacker Mychal Kendricks pleaded guilty to insider trading in front of a federal judge on Thursday in Philadelphia, Tommy Rowan of the Philadelphia Inquirer reports. 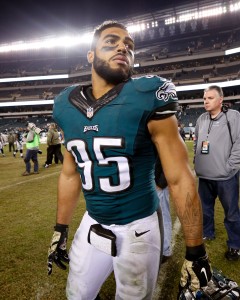 Kendricks could be sentenced to up to 25 years in prison. Sentencing is scheduled for December. The 27-year-old defender admitted guilt in scheme perpetrated years ago a statement last week, shortly before the Browns released him.

The former Goldman Sachs analyst-turned-sitcom writer who participated in this scheme with Kendricks, 27-year-old Damilare Sonoiki, is also expected to plead guilty. Kendricks said he did not use any of the $1.2MM profits and intends to pay back all illegally obtained funds.