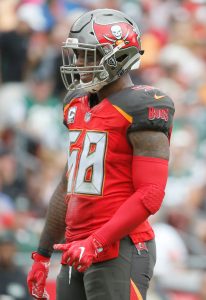 A season-ending injury will not only put an end to Alexander’s 2018 contributions, but signify a devastating development for Alexander’s free agency hopes next spring. Alexander is scheduled to become a free agent in March, and had been engaged in extension negotiations with Tampa Bay. He’ll now be facing a lengthy recovery period, which could put a cap on his next contract.

A fourth-round pick in the 2015 draft, Alexander has started 46 games over three-plus years with the Buccaneers. This season, he’d posted 38 tackles, two forced fumbles, and one sack while grading as the No. 53 linebacker among 79 qualifiers, per Pro Football Focus. With Alexander sidelined, the Buccaneers moved strong-side linebacker Adarius Taylor to the middle and inserted Jack Cichy into the game, but Cichy later left with a knee injury of his own.

If Tampa Bay is forced to look outside its organization for reinforcements, free agent linebackers such as Brian Cushing, Jonathan Freeny, Derrick Johnson, Kevin Minter, and Lawrence Timmons could conceivably be on the club’s radar.