Buccaneers wide receiver DeSean Jackson recently requested that the team trade him, per Ian Rapoport of NFL.com. However, Rick Stroud of the Tampa Bay Times tweets that Bucs head coach Dirk Koetter is unaware of the request, and if Jackson did ask for a trade, it would be surprising if Koetter did not know about it. 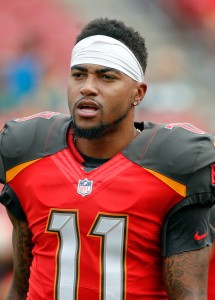 In any event, Rapoport says that the 3-3 Bucs have refused to grant that request, and it appears as if the team will hold on to Jackson through Tuesday’s trade deadline. After all, Koetter’s job security is tenuous at best, and GM Jason Licht is probably not much safer. As such, team brass may have personal reasons, as well as on-field reasons, to keep Jackson around.

Jackson signed a three-year deal, $33.5MM deal with the Bucs in March 2017, but he and quarterback Jameis Winston never got on the same page during Jackson’s first year with the club, and Jackson’s deep ball skills were sorely underutilized. He caught 50 balls for 668 yards and three scores last season, and his 13.4 yards per catch average was the lowest mark of his career.

This year, he and backup signal-caller Ryan Fitzpatrick were making magic together through the first two games of the season, but since Winston has resumed quarterbacking duties, Jackson has once again seen his numbers take a dip. In each of the last two games, Winston has missed an open Jackson for what would have likely been a long touchdown pass.

Although the Bucs have declined to honor Jackson’s request to date, this report will surely increase interest in the 31-year-old playmaker (who turns 32 on December 1). Any acquiring team would take on the remainder of his $11MM salary for this season and would be on the hook for his $10MM salary in 2019, but he could be released after the 2018 campaign without any dead money being left on the cap.