It sounds like the Dolphins are still willing to trade wideout DeVante Parker, but it would cost a lot to get him. NFL Network’s Tom Pelissero tweets that the organization has told inquiring teams that it would take at least a third-round pick to acquire the former first-rounder. 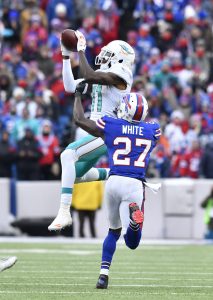 That seems to be a pretty lofty asking price, perhaps indicating that the Dolphins aren’t all that serious about moving the 25-year-old. Indeed, Armando Salguero of the Miami Herald tweets that the Dolphins are not actively shopping Parker, and that all trade talks have started with other clubs. Salguero does acknowledge that Parker remains available, but Miami is perfectly content to keep him if no one presents a good enough offer.

Parker hasn’t shown a whole lot through his first three years in league, with his 2016 performance proving to be a career-year (56 receptions, 744 receiving yards, four touchdowns). He’s struggled to stay on the field in 2018, hauling in only a pair of catches in two games, though Barry Jackson of the Miami Herald writes that Parker’s agent, Jimmy Gould, and the team appear to disagree on Parker’s health status at the moment. Gould has not asked that his client be traded, but he made it clear that Parker is healthy and needs to be playing.

It’s unlikely the Dolphins are going to keep Parker around for $9MM in 2019 (per Jackson on Twitter), meaning interested teams probably won’t give in to Miami’s present demands. While they’re not identical scenarios, the Browns gave away former first-round wideout Corey Coleman for a seventh-rounder. The Browns got a fifth-rounder for a former 1,000-yard receiver (Josh Gordon). The Dolphins even got a fourth- and seventh-rounder for Jarvis Landry. If the Dolphins aren’t willing to lower their demands, the team presumably wasn’t all that intent on moving Parker in the first place.