The Falcons aren’t as worried about Devonta Freeman‘s foot injury as they were about the knee injury he suffered earlier this year, according to Dan Graziano of ESPN.com (Twitter link). 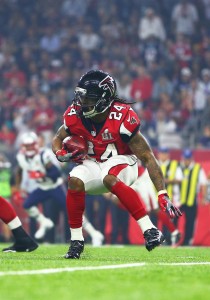 Freeman is now dealing with a bone bruise, and Ian Rapoport of NFL.com recently reported that the veteran running back’s status for Sunday’s game against the Buccaneers is in doubt. However, Graziano indicates that it’s “too soon to know” whether Freeman can suit up for Week 6. Either way, Atlanta isn’t concerned that Freeman is facing a long-term absence.

If Freeman can’t go, the Falcons will once again turn to a tandem of Tevin Coleman and Ito Smith. Tampa Bay, of course, is currently fielding on the league’s worst defenses, although it’s been much worse against the pass than the run. The Buccaneers rank 30th in passing DVOA to opposing running backs, so Coleman and Smith — both of whom are solid pass-catchers — could excel in that area on Sunday.