Saints, Eagles In On Patrick Peterson

Two NFC teams are attempting to pry Patrick Peterson away from the Cardinals. The Saints and Eagles have been calling the Cards for weeks about the three-time All-Pro cornerback, Jason La Canfora of CBS Sports tweets. 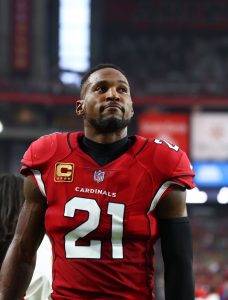 The Saints, in particular, may be a team to watch. Former NFL cornerback Bryant McFadden, Peterson’s cousin, said New Orleans is the preferred destination (Twitter link). Peterson, of course, went to college at LSU en route to becoming a top-five pick.

New Orleans has 2017 defensive rookie of the year Marshon Lattimore anchoring its cornerback corps but has not received much in the way of consistency on the other side. Patrick Robinson is expected to miss the rest of the season, and Ken Crawley and P.J. Williams are two of Pro Football Focus’ 10 lowest-graded full-time cornerbacks. Peterson sits fourth on this list through seven games.

Philadelphia is obviously not averse to splashy moves, either, and the defending Super Bowl champion is reeling after dropping to 3-4 on Sunday. Ronald Darby is in a contract year, and younger Philly corners Sidney Jones and Rasul Douglas have not exhibited much consistency this season.

11 comments on “Saints, Eagles In On Patrick Peterson”