The 49ers are activating safety Marcell Harris off of the injured reserve list, Ian Rapoport of NFL.com (on Twitter) hears. The rookie sixth rounder is expected to make his debut against the Raiders on Thursday night after being sidelined for several weeks with a hamstring ailment. 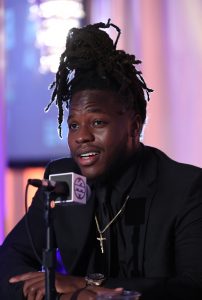 Harris lost his entire 2017 season at Florida due to a torn Achilles, so he has been out of action for quite a while. Before that injury, Harris turned in a strong 2016 campaign in which he totaled 73 tackles, four tackles-for-loss, one sack, two interceptions, one pass breakup, one quarterback hurry, one forced fumble and one fumble recovery. He also scored the first touchdown of his career on special teams at FSU on a fumbled punt.

The Niners will start D.J. Reed and Jaquiski Tartt at safety the Thursday night contest with Antone Exum and Tyvis Powell also serving as depth options. Harris will slide in as a reserve, taking a spot that opened when Adrian Colbert was placed on IR.

One comment on “49ers To Activate S Marcell Harris”