Bills To Bring LeSean McCoy Back In 2019

LeSean McCoy‘s name was bandied about in trade rumors last month, but the Bills held on to the veteran past Tuesday’s deadline. In a conversation with Jay Skurski of The Buffalo News, GM Brandon Beane said that McCoy was retained because he is a part of the team’s vision for 2019. 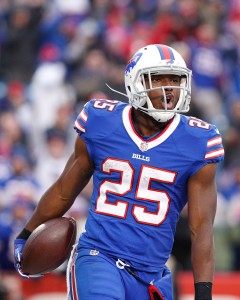 “Definitely,” Beane said when asked whether McCoy will be on the roster next year. “That’s the whole key. LeSean is still a very good player in this league. Our offense is not where we want it, but LeSean is still playing well. He’s a talented player. We like what he brings, to the point we’ll have him back in 2019. He’ll definitely be a part of that.”

The 30-year-old is currently averaging a career-low 3.4 yards-per-attempt, and he’s yet to score a touchdown this season. However, McCoy had compiled at least 1,000 rushing yards in both 2016 and 2017, and it’s clear that opposing teams are not respecting the pass.

Beane still believes in McCoy’s ability, which is why does not intend to trade or release McCoy, despite the potential cap savings. Releasing McCoy outright would save the club $6.4MM with just $2.6MM left over in dead money.

The GM’s position also reaffirms the club’s belief that the accusations against McCoy are not valid. For his part, the running back has denied any wrongdoing or connection to the July home invasion that left his ex-girlfriend battered.