The Falcons have had awful injury luck this year, but finally got some good news today. Linebacker Deion Jones will be activated off injured reserve, according to Adam Caplan of Sirius XM (Twitter link). 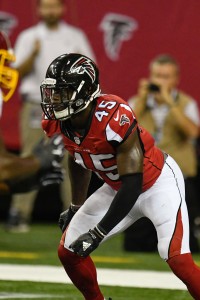 The team waived offensive lineman Rees Odhiambo in a corresponding roster move. The news couldn’t come at a better time for the Falcons, as their defense was shredded by Baker Mayfield and the Browns this past week. Jones went down with a foot injury all the way back in Week 1, and hasn’t played since.

A 2016 second round pick, Jones had blossomed into one of the best coverage linebackers in the NFL. He was great at covering running backs out of the backfield, and the Falcons have been shredded by opposing backs in the passing game since he went down. In the one game he played this year, Jones had nine tackles, an interception, and two passes defended.

Jones is one of a slew of Falcons defensive players who have had extended absences. Safety Ricardo Allen is done for the year with a torn achilles, and Keanu Neal was lost for the season with a torn ACL he suffered in Week 1. Atlanta is still a ways away from full health, but this is a massive boost to the defense.