Sam Bradford will no longer be attached to his Cardinals contract. Waived on Saturday, the ninth-year quarterback cleared waivers Monday, per Field Yates of ESPN.com (on Twitter). He’s a free agent. 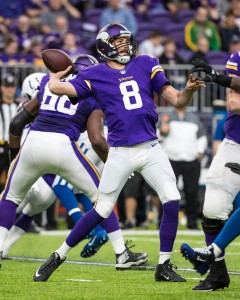 This was expected given the latest lofty accord to which he was signed. But Bradford may not be landing with a new team too soon. He’s still experiencing knee pain because of an extensive injury past.

In his final five weeks as a Cardinal, Bradford did not practice, with ESPN’s Chris Mortensen tweeting the knee was the cause of this. Bradford also was dealing with a pectoral injury. No cartilage remains in Bradford’s left knee, and bone-on-bone situation may make it difficult for another team to believe he can stay healthy enough to be an option as a short-term stopgap starter or a backup.

Bradford will turn 31 this week. The Cardinals will be charged an additional $2.35MM, per Tom Pelissero of NFL.com (via Twitter), due to the former No. 1 overall pick clearing waivers.

Although some teams are in need at quarterback, Bradford may not be a fit. The Giants are not believed to be interested. The Cardinals guaranteed him $20MM on a two-year deal with a 2019 option but only started him for three games. Steve Wilks benched Bradford for Josh Rosen in Week 3. Bradford threw just 80 passes as a Cardinal.