The Seahawks will soon have some tough decisions to make at the running back position. Head coach Pete Carroll told reporters that J.D. McKissic will return to the field next week (via Bob Condotta of the Seattle Times on Twitter). 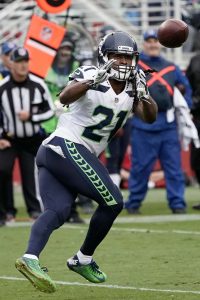 The running back will at least be returning to practice, but there’s some optimism that he could even see the field for the Seahawks’ matchup against the Panthers on November 25th.

McKissic has spent the entire season on the injured reserve as he’s dealt with a Jones fracture in his foot. The 25-year-old had a breakout season in 2017, compiling 187 rushing yards and one touchdown on 46 carries. He also added another 34 receptions for 266 yards and two scores. The former undrafted free agent out of Arkansas State also has some special teams and kick-return experience during his brief career.

If McKissic does end up being activated from the injured reserve, he could end up taking C.J. Prosise‘s roster spot. Prosise appeared in five games earlier this season, but he’s been inactive for four of the past six games. Whether the Seahawks roll with McKissic or Prosise, the player will likely be listed behind Chris Carson, Mike Davis, and Rashaad Penny on the depth chart.

5 comments on “Seahawks RB J.D. McKissic To Return Next Week”