Buried beneath all the coaching news this morning, the Bills quietly signed quarterback Derek Anderson to a one-year extension, according to Mike Rodak of ESPN.com (Twitter link). 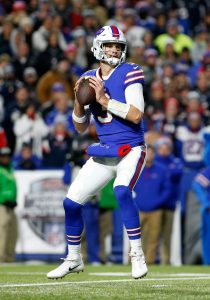 Anderson, 35, appeared on his way out of the league when the Panthers moved on from him and no team signed him this past offseason. But then the Bills came calling in October when Josh Allen went down with an elbow injury. In true journeyman fashion, he ended up starting two games for Buffalo, losing both. He was concussed in a Monday Night Football loss to the Patriots, and didn’t play again the rest of the season.

While the deal keeps him tied to Buffalo through the 2019 season, it’s still no guarantee he’s back next year. Terms haven’t been made public yet, but it’s likely the deal contains little or no guaranteed money. The Bills also recently extended fellow backup Matt Barkley, giving him two extra years. Barkley fared much better than Anderson did in his one start this season, and would seem to have the leg up on Anderson to be Allen’s backup next year.

Anderson’s long-winding career has taken him through Baltimore, Cleveland, Arizona, Carolina and now Buffalo, and the veteran has started 49 games in his 14 year career. All told he has a 60:64 career touchdown to interception ratio, with 10,878 passing yards and a 54.3% completion percentage.

2 comments on “Bills Sign Derek Anderson To One Year Extension”