It’s been something of a formality for a while now but the Jets made it official moments ago, informing Todd Bowles he’d been fired, the team announced in a tweet. 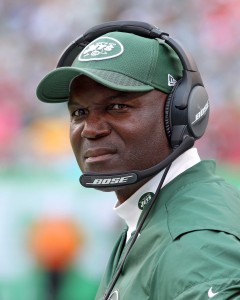 In a statement seen in the tweet, Jets CEO Christopher Johnson said “I would like to thank Coach Bowles for his dedication to the New York Jets for the last four years,” Johnson said. “After carefully evaluating the situation, I have concluded that this is the right direction for the organization to take. I would like to wish Todd, Taneka and their family only the best.”

Another move that had been tentatively expected has now been confirmed, as the team will be keeping GM Mike Maccagnan for next season. The team announced Maccagnan “will work closely with owner Chris Johnson on the search for a new” coach, according to Adam Schefter of ESPN.com (Twitter link).

Bowles did a good job hanging on as long as he did, as many assumed he would be a goner last year. Instead, he led the Jets to a surprisingly strong 5-11 record with Josh McCown and Bryce Petty, and was brought back for another year. Things got off to a great start with a huge win on Monday Night Football in Week 1 of this year, but as the losses eventually piled up it became increasingly clear Johnson wanted a different coach to pair with Sam Darnold for the future. Offensive coordinator Jeremy Bates is all but certain to be replaced, and it’s likely the team will want an offensive minded coach for Darnold. Bowles was highly regarded as the Cardinals’ defensive coordinator before he took over the Jets job, and will reportedly be a candidate in other teams’ searches this cycle.

As for his replacement, the team has been linked to Mike McCarthy in recent weeks. We heard yesterday that former Lions coach Jim Caldwell was also expected to be interviewed by New York. In addition to McCarthy and Caldwell, Jim Harbaugh has also been repeatedly linked to the team, although Jets CEO Christopher Johnson recently denied they were interested.