Although the Raiders got a huge win over the Steelers today, they didn’t escape the game unscathed. Left guard Jon Feliciano suffered a calf injury that is believed to be season ending, a source told Michael Gehlken of the Las Vegas Review Journal (Twitter link). 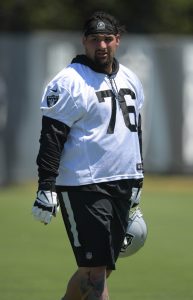 Feliciano, 26, was drafted by the Raiders in the fourth round back in 2015. He’s bounced between a starting and reserve role during his years with the team, and has started three games this season. Gehlken notes that he “not only finished the go-ahead TD drive but attempted to re-enter game for extra point”, and that “his toughness part of profile that stands to attract teams in March.”

Feliciano is scheduled to be an unrestricted free agent this spring, and could land a decent deal as the open market value for interior offensive linemen has sky-rocketed in recent years. Feliciano, a Miami product, has received below average but not poor marks from Pro Football Focus this year, but was graded better last year.

One comment on “Raiders OL Jon Feliciano Done For The Season”