Could Hue Jackson return to the head coaching ranks? The Bengals are at least interested in hearing him out and could interview him as early as Wednesday, according to Ian Rapoport of NFL.com (on Twitter). 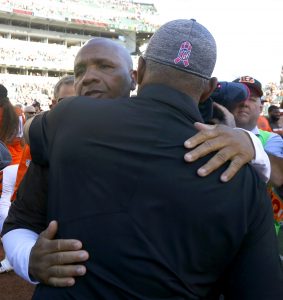 The Bengals have a long history with Jackson and quickly scooped him up after he was fired by the Browns in 2018. Jackson has the support of longtime former head coach Marvin Lewis, which likely helped him secure a head coaching interview with the Bengals.

The Bengals have already interviewed in-house candidates Darrin Simmons and Bill Lazor for the gig, so they’re doing their homework internally before casting a wide net elsewhere. Old friend Vance Joseph will have a two-day chat with the Bengals this week and a meeting with Chiefs offensive coordinator Eric Bieniemy is on tap for Friday. Patriots offensive coordinator Josh McDaniels and Rams assistant Zac Taylor are also among the names in the mix.