At a Wednesday press conference, Giants GM Dave Gettleman reaffirmed that Odell Beckham Jr. remains in the team’s plans. However, he declined to commit to a future with longtime franchise quarterback Eli Manning. 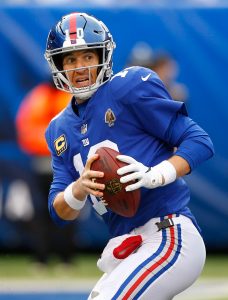 “We didn’t sign him to trade him,” Gettleman said when asked about the temperamental wide receiver (Twitter link via Ralph Vacchiano of SNY).

When pressed further about OBJ, Gettleman told reporters, “You heard what I said.” However, it’s a different situation when it comes to Manning.

Gettleman said he had a “very extensive” and “no-holds barred” conversation with Manning on Monday, suggesting that Manning could be on his way out.

“We will do what’s in the best interests of the New York Giants. We’re trying to build sustained success. That takes brutal honesty and some tough decisions,” Gettleman said (Twitter link via Vacchiano).

Early in the 2018 season, it seemed certain that Manning wouldn’t be the Giants’ quarterback in 2019. The Giants were 1-7 and the season was circling the drain again, with Manning struggling heavily in his first year in Pat Shurmur’s offense. But, the Giants managed to turn things around by winning four of five games and had a near upset win over the Colts.

Manning, ultimately, finished out with his best statistical season in years, and his yards per attempt was his best posting since 2011. Before the Giants’ home finale, we heard that Manning was still more likely to return as the team’s QB than not. Now, however, that’s very much in question.