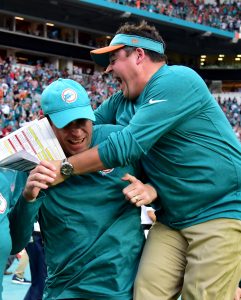 Loggains, a longtime friend and co-worker of Adam Gase, was said to be in the lead for the OC job right after Gase shook hands on his new job with the Jets. Gase is expected to be the offensive play-caller for the Jets, but he’ll likely lean on Loggains for support as they look to get the most out of young quarterback Sam Darnold. In addition to serving as the OC, Loggains will also carry the title of quarterbacks coach.

Gase was Chicago’s offensive coordinator in 2015 when Loggains became the club’s quarterbacks coach. Together, the two men got a tremendous season out of Jay Cutler in which he threw for 21 touchdowns against a career-low eleven interceptions. Loggains took over the OC post when Gase left for Miami, but the two reunited in South Beach last year. Now, they’re together again in New Jersey.