After a week of drama, Kliff Kingsbury will begin interviewing for NFL jobs after all, according to Jay Glazer of Fox Sports (Twitter link). 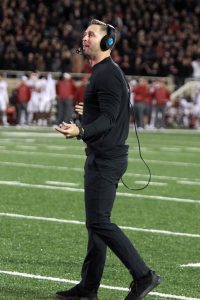 Adam Schefter of ESPN confirmed Glazer’s report in a tweet, adding that Kingsbury is “square in the HC mix.” Glazer’s initial tweet indicated that Kingsbury had resigned as USC’s offensive coordinator in order to be able to interview, while Schefter’s only states that “USC initially blocked him from doing so.” Ian Rapoport of NFL Network tweeted that a USC official told him Kingsbury is still employed there, so it seems like he hasn’t resigned at this point.

We first heard last week that the Jets and Cardinals were interested in interviewing Kingsbury, but then word came that USC’s athletic director was blocking him from interviewing. There was a report a couple of days ago that he could resign in order to pursue NFL opportunities, and that report stated his contract with USC had a “very low buyout” and that Kingsbury would “undoubtedly find work at least as an offensive coordinator” in the NFL.

There’s a “growing perception in league circles” that the Cardinals “are seriously considering Kingsbury for their position”, according to Albert Breer of SI.com (Twitter link). Sources also told Schefter that there was “strong mutual interest” between Kingsbury and the Cardinals prior to the athletic director blocking things. With that hurdle out of the way, Kingsbury will now presumably interview for Arizona’s job as well as the one in New York.

While Kingsbury’s tenure at Texas Tech was never particularly successful in terms of wins and losses, he always had one of the most innovative and dynamic offenses in the country, and is a highly respected offensive mind. It’s been reported for a while now that NFL teams were looking to pick his brain, and he did develop Patrick Mahomes with the Red Raiders. He’s been linked recently to the Patriots’ offensive coordinator job if Josh McDaniels were to leave to take a head coaching gig, and Tom Brady sung his praises on the radio earlier today, according to Zack Cox of NESN.com.

8 comments on “Kliff Kingsbury To Interview For NFL Jobs”