It looks like the first head coaching search of the offseason might be coming to an end. The Packers are “zeroing in on” hiring Titans offensive coordinator Matt LaFleur, sources told Adam Schefter of ESPN.com (Twitter link). The team has since confirmed the hire via press release. 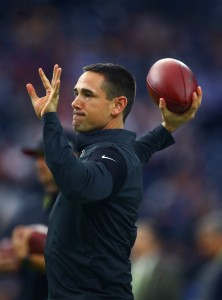 While nothing is official yet, Schefter writes that the Packers “have begun notifying other HC candidates that they’ve interviewed that they’re out and the team has made its choice.” Schefter then posted a follow up tweet noting that the team offered the job to LaFleur. It’s a rapid ascent for LaFleur, who last season wasn’t even calling plays. LaFleur was the Rams’ offensive coordinator for the 2017 season, but Sean McVay called the plays. He was the Falcons’ quarterbacks coach before that from 2015-2016, and learned under two of the league’s most highly regarded offensive minds in Kyle Shanahan and McVay.

He was then hired away by the Titans to become part of Mike Vrabel’s first staff, where he served as the playcaller. Despite Marcus Mariota being frequently hurt, LaFleur helped guide the team to nine wins, with Tennessee ultimately falling just short of the playoffs. LaFleur is only 39, and his hiring continues the trend of teams looking for young offensive gurus as head coaches.

Despite dealing with a nerve injury in his throwing arm that limited him for several games and knocked him out of several others, Mariota averaged the most yards per attempt of his career under LaFleur. While the offense wasn’t nearly as dynamic as the one LaFleur helped build in Los Angeles, it was a lot more creative and innovative than the one Mike Mularkey had been running in Tennessee. Aaron Rodgers had clearly grown frustrated with the offense during Mike McCarthy’s last years with the Packers, and LaFleur should at the very least provide a much needed breath of fresh air to the offense.

While the offensive side of the ball is set to undergo a total makeover, there might be some continuity on defense. The move means the team is likely to keep defensive coordinator Mike Pettine and the rest of the defensive staff in place, according to Rob Demovsky of ESPN (Twitter link). Rapoport notes in a separate tweet that former Buccaneers offensive coordinator Todd Monken was the “other really strong candidate” for the Packers, but the team settled on LaFleur without conducting a second round of interviews.