Last year, Patriots star tight end Rob Gronkowski contemplated retirement. This year, Ian Rapoport of NFL.com reports that Gronk will once again consider hanging up the cleats, but this time, there is a better chance he will actually walk away from the game. 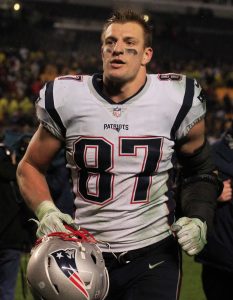 Before the 2018 draft, New England reportedly had a trade in place that would have sent Gronkowski to the Lions, but when Gronk learned of that news, he threatened to retire rather than play for another club. Of course, there has been some drama between Gronkowski and the Patriots for several years now, some of which may be attributed to the fact that Gronkowski believes he is severely underpaid.

Regardless of the source of tension, we heard at the end of last month that Gronkowski had grown tired of the “Patriot Way,” and underpaid or not, he is financially set. Plus, thanks to his effusive personality, he will have some sort of career outside of football if he so chooses.

The 29-year-old has once again battled injuries throughout the course of the 2018 campaign, and Rapoport says sources close to Gronk have said the season has taken an emotional toll on him. He certainly has not played up to his usual standards, with just three scores and a yards-per-game mark of 52.5 that is higher only than his rookie season figure of 34.1. Teams have largely stopped double-teaming him, and he just does not look like his usual explosive self.

So it would not be surprising to anyone if Gronkowski calls it a career and starts the next chapter of his life whenever the Patriots’ season ends.