One of the NFL Draft’s top defensive back prospects will be sidelined for a while. NFL.com’s Ian Rapoport reports (via Twitter) that Alabama safety Deionte Thompson had surgery on Friday to repair a torn ligament in his wrist. 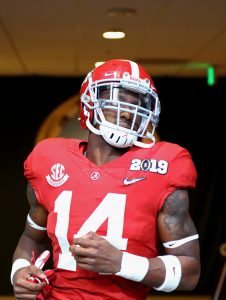 Unsurprisingly, it’s unlikely that Thompson will be able to participate in the NFL Scouring Combine, which takes place next week. Fortunately, Rapoport says the safety isn’t facing any long-term issues stemming from the injury.

Along with Mississippi State’s Johnathan Abram and Delaware’s Nasir Adderley, Thompson was considered to be one of the top safety prospects in the upcoming draft. The 22-year-old had a hot start to the 2018 campaign, with some pundits giving the safety a first-round projection. However, a rough second half of the season hurt his draft stock, and this most recent surgery could bump him back even further. While Thompson has the ability to be a starting-caliber NFL player, he may not be selected until the third day of the draft.

During his first full season as a starter, the six-foot-two, 196-pound senior finished with 79 tackles, six passes defended, three forced fumbles, and two interceptions. He had primarily served as a backup during his sophomore and junior seasons at Alabama.