The Bears are adding a running back. NFL.com’s Ian Rapoport reports (via Twitter) that the team has reached an agreement to sign Mike Davis. 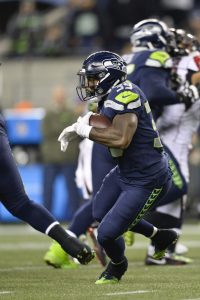 This will be the first significant payday for the 26-year-old, who languished for two years in San Francisco before finding a home with the Seahawks. The deal is for two years and worth $6MM, per Rapoport (on Twitter). This pact carries a max value of $7MM. Davis hit free agency last offseason but decided to stick with the Seahawks.

After starting six games with Seattle in 2017, Davis established career-highs across the board in 2018. In 15 games, the running back ran for 514 yards and four touchdowns on 112 carries. He also showed some pass-catching prowess, hauling in 34 receptions for 214 yards and one score.

His role in Chicago is a bit uncertain considering the presence of both Jordan Howard and Tarik Cohen. Davis is versatile enough to serve as insurance for both of those players, and he’s a better option than both Taquan Mizzell and Ryan Nall. However, barring a trade, it’s unlikely Davis will end up playing an overly-significant role for his new team.