Ted Larsen is headed back to Chicago. The two-year Dolphins blocker will return to the Bears, with whom he played in 2016. 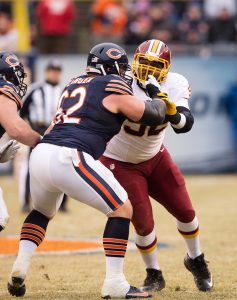 The 10th-year veteran interior lineman will sign a one-year deal with the Bears, Aaron Wilson of the Houston Chronicle tweets. The Bears announced the move.

Although the Buccaneers inquired about the 31-year-old free agent, Larsen will not trek back to Tampa. Instead, he may become key depth in Chicago.

A sixth-round Patriots pick in 2010, Larsen has played for the Bucs, Cardinals, Bears and Dolphins. He has vacillated between part- and full-time offensive line duties but was a full-timer in Miami, working as the Fins’ left guard. Amid an ongoing roster purge, the Dolphins cut Larsen last week.

With Chicago in 2016, Larsen was a part-timer, having started eight games. With Kyle Long, Cody Whitehair and James Daniels in place, Larsen may well become the Bears’ top interior-line backup.