Teams are starting to have make decisions on tendering their restricted free agents, and the Broncos made a big one late Saturday night. The team won’t be tendering tight end Matt LaCosse, a source told Mike Klis (Twitter link). 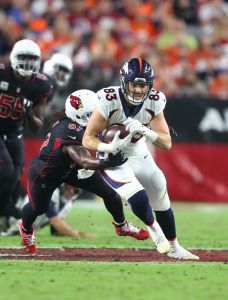 LaCosse became the team’s starter down the stretch this past season, and showed some promise. The lowest tender option will be $2.025MM this year, which Denver apparently thinks is too expensive. Klis posted a followup tweet new Broncos offensive coordinator Rich Scangarello’s offense “needs tight ends who are plus blockers”, and that while LaCosse is “a nice receiving tight end and willing blocker”, he’s “just not built like other TEs.”

Klis expects the team to add a blocking tight end. Troy Renck of ABC Denver tweeted in response that the team is expected to draft a tight end. The Broncos haven’t had a reliable tight end option in recent years, and getting a consistent one would be a huge boost for new quarterback Joe Flacco.

LaCosse entered the league as an undrafted free agent in 2015, and spent the next few years bouncing on and off of the Giants’ roster before landing in Denver in late 2017. Last season he had 24 catches for 250 yards and one touchdown.