The Chargers quietly agreed to a multi-year extension with general manger Tom Telesco at the end of the 2018 season, according to Eric D. Williams of ESPN.com (Twitter link). Telesco’s prior contact was due to expire at the end of this year. 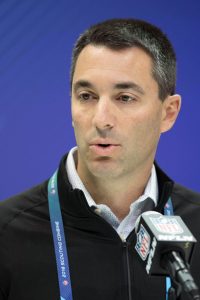 Telesco, 46, was named the Chargers’ GM in advance of the 2013 campaign. Since then, he’s guided the club to two playoff appearances, first during his debut season and again this past year. Telesco is now on his second head coach, having fired Mike McCoy and hired Anthony Lynn during the 2017 offseason.

Telesco began his career in minor roles with the Bills and Panthers, but spent the bulk of his pre-Chargers time with the Colts, serving in a variety of roles including director of pro scouting and director of player personnel. He’s built a solid Los Angeles roster, but could need to address several areas — including finding quarterback Philip Rivers‘ heir — in the near future.