It started off as mere speculation, but now executives around the league believe the Cardinals are looking to target Oklahoma quarterback Kyler Murray with the No. 1 pick in the 2019 NFL Draft, SNY’s Ralph Vacchiano writes. 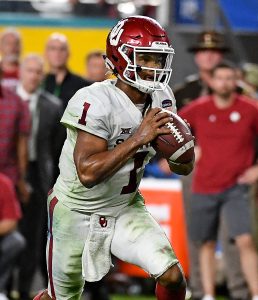 That idea started with an old quote from new head coach Kliff Kingsbury, who said he would take Murray with the top pick when he was the coach at Texas Tech. Though Kingsbury has professed Josh Rosen as his guy, Cardinals GM Steve Keim made waves when he said Rosen was there quarterback “for now” earlier this week. Rosen later added fuel to the fire when he deleted all of his Instagram posts relating to the organization. Now Vacchiano says that many around the league see all the speculation coming to fruition.

“I really think he’s going No. 1,” one league source said. “He fits exactly what Kingsbury wants to do out there.”

Murray would seem to be a nice fit for Kingsbury’s high-flying offense. He possesses game-breaking mobility to go along with an accurate touch and an impressive deep ball. It is all just speculation at this point, but the possibility of Kingsbury getting Murray and flipping Rosen, the team’s top pick in 2018, for picks is becoming more of a reality the closer we inch to the draft.

Most current mock drafts tie the Cardinals to Ohio State star pass rusher Nick Bosa at No. 1, but Murray is being tabbed anywhere from No. 5-10. It wouldn’t be a shock to hear his name called with the top selection come draft day.