Giants To Meet With Mike Remmers

The Giants will meet with offensive tackle/guard Mike Remmers on Thursday, according to agent Brett Tessler (on Twitter). 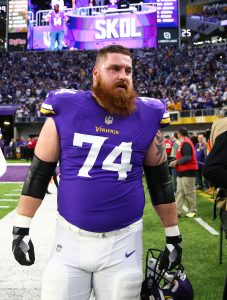 As Tessler points out, Remmers played under current Giants coach Pat Shurmur in Minnesota, when Shurmur was his offensive coordinator. The Vikings released Remmers a few days ago after a two year stint in Minnesota. He started all 16 games for the Vikings last year, but his salary proved to be too expensive to keep him around. He was cut with an failed physical designation, as he’s apparently dealing with an unknown injury. Remmers had been the Panthers’ starting right tackle in 2016, then signed a five-year $30MM deal with the Vikings in March of 2017.

Offensive line has been a concern for New York for a while now, so it makes sense why they’re interested. The Giants have indicated they plan on rolling with Eli Manning for at least another year, and if they want to get him back to a serviceable level he’ll need to be well-protected.

Remmers transitioned from tackle to guard during the 2017 season, and then played exclusively at right guard last year. He can play either inside or outside, so he’s a nice depth option. He received average marks from Pro Football Focus last year, grading out as their 48th-best guard.

7 comments on “Giants To Meet With Mike Remmers”