The Jets’ need for pass rushing help has been well documented and they’re already targeting some of this year’s biggest available names. Gang Green is showing interest in Dante Fowler (Rams), Ezekiel Ansah (Lions), and Preston Smith (Redskins), according to ESPN.com’s Rich Cimini (on Twitter). 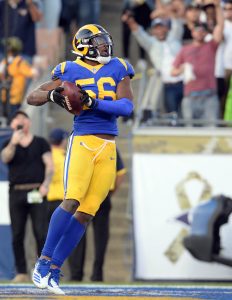 This year’s crop, at first glance, is positively loaded with impactful edge rushers. However, top flight guys like Demarcus Lawrence (Cowboys), Jadeveon Clowney (Texans), Frank Clark (Seahawks), and Dee Ford (Chiefs) are expected to receive tags or sign long-term deals with their respective clubs. That may leave the Jets to sift through some lower tier options, though Fowler, Ansah, and Smith all have upside.

Fowler, a former No. 3 overall pick, didn’t do a ton during the regular season, but he made a dent in the Rams’ first two playoff games. Ansah was limited to just seven games in 2018, but his history (14.5 sacks in 2015; 12.0 sacks in 2017) shows that he’s capable of much more when healthy. Smith, who had only four sacks last year, has amassed eight sacks in two of his four pro seasons and graded out as Pro Football Focus’ eighth-best 3-4 outside linebacker in the league in 2018.

With $102MM+ to burn, the Jets should be able to sign at least a couple of impact edge rushers in March.