The Raiders have reached an agreement to trade guard Kelechi Osemele to the Jets, according to Adam Schefter and Josina Anderson of ESPN.com (Twitter link). Oakland will receive a 2019 fifth-round pick (No. 140), while New York will acquire Osemele and a 2019 sixth-round pick (No. 196), tweets Jerry McDonald of the Oakland Tribune. 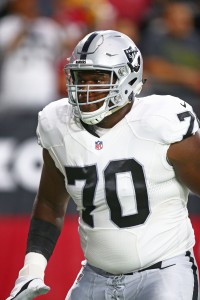 Oakland, of course, acquired superstar wideout Antonio Brown from the Steelers late last night, just months after dealing away their own stars in edge rusher Khalil Mack and receiver Amari Cooper. Now, the club is dealing away arguably its best offensive lineman, so it’s unclear if the Raiders view themselves as contenders or are instead continuing with their rebuild.

Osemele, 29, inked a five-year, $58.5MM deal with Oakland in 2016 after spending the first four years of his career in Baltimore. After missing only one game during his first two years in the Bay Area, Osemele was sidelined by a knee injury for five contests in 2018. It’s fair to wonder if that knee issue bothered Osemele all season, as he finished with the worst Pro Football Focus grade of his career last season.

The Raiders will clear $10.5MM in both cash and cap off their books by moving Osemele, while the Jets will take on the same amount. Both clubs will remain among the top-seven teams in available cap space heading into the new league year on Wednesday. Osemele is under contract through the 2020 season, and will carry an $11.7MM cap charge next year.

The Jets’ fielded one of the NFL’s worst offensive lines last season, and had pursued Osemele when he was a free agent in 2016, so the marriage makes sense on paper. In 2019, New York ranked dead last in adjusted line yards, Football Outsiders’ offensive line metric, and also ranked 32nd in adjusted line yards when running behind the center/guard. James Carpenter, the Jets’ left guard starter entering last season, missed the second half of the year with injury and is now a free agent, leaving a gap that Osemele will now fill.

6 comments on “Raiders To Trade Kelechi Osemele To Jets”