On Tuesday, Bears tight end Zach Miller took to social media to announce his retirement from football. Miller recently indicated that the door was still open to playing, but upon further reflection, he has decided to walk away from the game due to health and safety concerns. 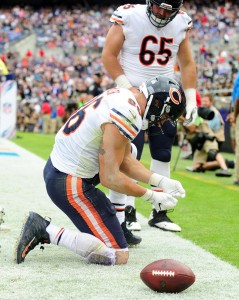 “The time has come to move on from playing the game of football,” Miller wrote on Instagram. “It has been an incredible journey for myself and my entire family and we can’t thank you enough for your continued support. I would love more than anything to step on Soldier Field one last time but I physically cannot give the game and our fans what they deserve.”

Miller, who spent the first three seasons of his career as an afterthought in Jacksonville, did his best work with the Bears between the 2015 and 2017 seasons. In 2016, Miller caught a career-high 47 passes and 486 yards with four touchdowns. In ’17, he was on pace for similar stats with 20 grabs for 236 yards and two TDs before his devastating injury in October.

Last year, doctors told Miller that he was at risk for losing his leg after he severely dislocated his left knee and tore his popliteal artery. Thankfully, after nine surgeries, Miller’s knee is safe. Still, it’s probably for the best that Miller does not play football again.