Cardinals Receiving Interest In No. 1 Pick

The Cardinals have received feeler calls from teams inquiring about trading up for the No. 1 overall pick, according to Ian Rapoport of NFL.com. However, at this time, it’s not clear how serious the Cardinals are about moving the top choice. 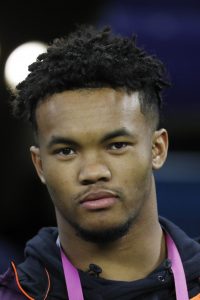 For months, it has been widely rumored that the Cardinals will use the No. 1 pick to select Oklahoma quarterback Kyler Murray. But, for what it’s worth, the Cardinals reportedly have not reached a consensus on the dynamic athlete. Some in the Cardinals’ front office would prefer to spread the wealth a bit by trading down and filling multiple holes on the roster. With several QB-needy teams also eyeing Murray (the Raiders, some say, could be in the hunt), there’s a real opportunity for the Cardinals to get excellent value if they’re willing to pass up on this year’s most intriguing signal caller.

Top defenders like Nick Bosa and Quinnen Williams would also make plenty of sense for the Cardinals and if they’re not specifically hung up on landing Bosa, they could be able to move down, fix their matador defense, and still come away with another young QB such as Dwayne Haskins or Drew Lock.

The Cardinals have only a few days left to sift through the offers and make up their minds – the first round of the NFL Draft will get underway on Thursday night at 8pm ET/7pm CT.

5 comments on “Cardinals Receiving Interest In No. 1 Pick”