The Cowboys and Demarcus Lawrence are nearing agreement on an extension, according to PFT. We have similar word from Ian Rapoport and Mike Garafolo of NFL.com (video link) who hears the two sides are in deep negotiations with reason for cautious optimism. 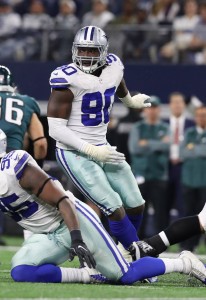 Both the Cowboys and Lawrence’s agent want to get a deal done sometime soon and there’s hope that a pact can be agreed to in the near future. Often times, franchise tagged players will not make real headway on negotiations until the deadline draws near in July, but this could all be sewn up months in advance.

Just a few days ago, things seemed to be at an impasse between the two sides. The Cowboys finally upped their offer to about $20MM per year, but Lawrence’s camp countered by asking for around $22.5MM per season. A deal worth $20MM/year on average would make Lawrence the NFL’s highest-paid 4-3 defensive end, but he’s now gunning for a contract that would put him in the same neighborhood as Aaron Donald and Khalil Mack.

Lawrence, 27 in April, has spent his entire five-year career with the Cowboys. He has posted double digit sacks in each of the last two campaigns and is currently cuffed by a second consecutive franchise tag. Unfortunately for Dallas, Lawrence has indicated that he will not play on the one-year tender, even though it would pay him $20.5MM.