While it would appear Frank Clark would be a critical part of the Seahawks’ core going forward, being by far the franchise’s top edge rusher, he continues to be mentioned as a trade candidate. 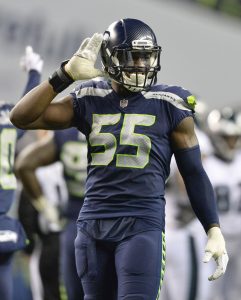 Pete Carroll said the standout defensive end will be part of the 2019 Seahawks, and the team used its franchise tag for the first time in nine years in order to retain Clark. Negotiations began on a new deal earlier this offseason, and the sides made progress in early March. But it’s not certain if they’ve closed the gap since. It’s possible the Cowboys’ subsequent $21MM-AAV deal for DeMarcus Lawrence has complicated the Clark talks. Like Lawrence did before his extension, Clark has said he will not report to training camp without a new deal.

Clark may be able to fetch a first-round pick. At 25, he is two years younger than Dee Ford — who netted the Chiefs a 2020 second-rounder in a tag-and-trade swap with the 49ers — and has been more consistent. Although Clark became a Week 1 starter for the first time last season, he registered 19 sacks between the 2016-17 slates prior to his 13-sack 2018. But his departure would obviously leave a major hole on Seattle’s depth chart, especially considering the team does not have a surefire starter opposite Clark.

Teams were interested in a Clark tag-and-trade transaction at free agency’s outset, but the Seahawks are believed to only be motivated to move the fifth-year player if they are blown away by an offer. The Seahawks just authorized a record-breaking Russell Wilson contract, but John Schneider said the quarterback’s deal will not impact Clark’s situation. Following the Wilson re-up, the Seahawks hold just more than $9MM in cap space.

Schneider said recently he would like to acquire additional draft capital this year. No team holds fewer than the Seahawks’ six picks. Although Seattle often gains draft picks by trading back in the first round, trading Clark would obviously be a way to procure at least one high-value choice.