It’s been well over a month since we heard that the Seahawks and defensive end Frank Clark were making progress in negotiating a long-term contract. Seattle put the franchise tag on Clark shortly thereafter, which gives the two sides until July 15 to work out a multi-year pact, and Clark said he would not report to training camp without a new deal in place. 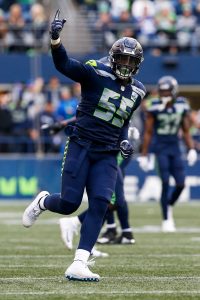 DeMarcus Lawrence signed a five-year deal worth over $100MM with the Cowboys last week, and that appeared to provide a benchmark for talks between Seattle and Clark. But still, no news as of yet.

Jay Glazer of The Athletic (subscription required) writes that several teams were interested in trading for Clark at the outset of free agency, but he notes that there has been no trade chatter since then. Glazer adds that the Seahawks love Clark, and that unless the team is overwhelmed by a trade offer, Clark will remain with Seattle. Given Clark’s stance with respect to the franchise tag, it sounds as if he will be getting his big-money, long-term deal before July 15.

Clark, a 2015 second-round pick, has been a fixture in the team’s front seven since the 2016 campaign. In the last three years, he ranks seventh among NFL defensive linemen in sacks (32) and 10th in quarterbacks hits (66). Last season, Pro Football Focus graded Clark as the league’s No. 18 edge defender.

Once the April 15 “deadline” for a new contract with quarterback Russell Wilson passes, perhaps the Seahawks will shift their focus back to Clark.