The assault and battery charges against Redskins safety Montae Nicholson have been dropped, as Kareem Copeland of the Washington Post tweets. Nicholson was cuffed late last year and the video of the incident appeared to show him brutally assaulting another man and knocking him unconscious. 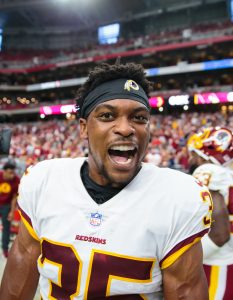 That wasn’t Nicholson’s first off-the-field incident, either. In 2017, cops arrested Nicholson under suspicion of driving while impaired. Still, Nicholson made seven starts for Washington last year and showed promise while on the gridiron. He could still face league suspension from the November arrest, but for now, he appears poised to be a part of the Redskins’ plans for 2019. He projects to see playing time in a safety group headlined by new addition Landon Collins.

Last year, Nicholson recorded 41 stops and one pass defensed in his 14 appearances. And, as a rookie, he notched his only interception to date in Week 3 against the Raiders.

One comment on “Assault Charges Against Redskins’ Montae Nicholson Dropped”