The Bengals have expressed interest in free agent defensive tackle Gerald McCoy, according to Dianna Russini of ESPN.com (Twitter link). 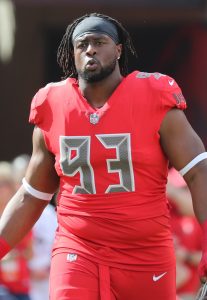 McCoy has been a popular name since being released by the Buccaneers earlier this week, as both the Browns and Colts at least considered signing the veteran interior defender. Cincinnati, for its part, doesn’t have nearly as much available cap space as does Cleveland or Indianapolis, but with more than $20MM in reserves, the Bengals could certainly fit McCoy onto their books.

The Bengals made two offseason additions — free agent Kerry Wynn and fourth-round draft choice Renell Wren — to a defensive line that already included Geno Atkins, Andrew Billings, Carlos Dunlap, Carl Lawson, and Sam Hubbard. McCoy would likely become an immediate starter next to Atkins (and thus reduce Billings’ playing time), but there’s plenty of rotational snaps to go around, especially on a unit that ranked only 28th in pressure and 30th in adjusted line yards, per Football Outsiders.

McCoy, 31, ranked fourth among defensive tackles with 21 quarterback hits in 2018 and finished as the NFL’s No. 28 interior defender, per Pro Football Focus. He’s demonstrated the ability to line up at a few different spots along the defensive interior, which could be a plus for the Bengals and new defensive coordinator Lou Anarumo.