Falcons assistant GM Scott Pioli has stepped down, according to a team announcement. Atlanta’s press release offers little in the way of reasons for Pioli’s decision, except to note that he “wants to pursue other opportunities.” 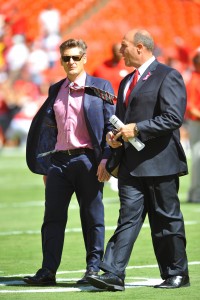 Pioli joined the Falcons in 2014 after serving as the Chiefs’ GM for four seasons. Before that, Pioli spent time with the Patriots, Jets, Ravens, and Browns.

“We understand and respect the decision Scott, Dallas and their family have come to today and wish them nothing but the best,” Falcons GM Thomas Dimitroff said. “Over the last five years Scott has not only provided tremendous value to me, but to the entire the Falcons organization. He is a dear friend and will be missed within our organization. We are continuing to assess the structure within our organization and move forward with our next steps.”

Meanwhile, Pioli says that he never intended to stay with the Falcons for the long haul.

“When I accepted this position more than five years ago, we all believed this would likely be a two or three-year working relationship,” Pioli said. “I came in to work closely with Thomas on personnel structure, processes and decisions. I loved the concept, was confident I could provide value and have enjoyed the challenge. Now, after more than five years with the Falcons, I am ready for a change. I want to thank all of my co-workers at Flowery Branch as it has truly been an honor to be a part of this organization and I am thankful to have been a part of this football team and the Falcons family.”

It’s not immediately clear whether Pioli has his next opportunity lined up, but there is a newly available GM vacancy in New York.