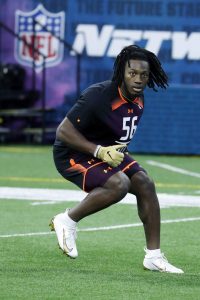 Savage was Green Bay’s second choice in the first round, and the Packers traded two fourth-round selections to move up nine spots to land the Maryland product with the No. 21 overall pick. Savage, a safety, has a great chance to become an instant starter alongside free agent acquisition Adrian Amos and should help solidify the Packers’ defensive backfield. He represents yet another example of the Packers’ attempts to shore up their defense this offseason.

Savage’s stock rose pretty dramatically in the weeks leading up to the draft. He put himself on the map as a junior with 59 tackles, eight pass breakups, and three interceptions, and he delivered yet again last year with four picks, two pass breakups, and 52 tackles (5.5 tackles for loss). He really impressed in workouts, however, and evaluators began to see him in a whole new light.

At 5’11 and 198 pounds, Savage lacks ideal size for the next level. However, the Packers feel that his athleticism, combined with his football IQ and his instincts, will make him a success story in the NFL.

Savage’s contract will be a standard four-year pact with a fifth-year option, and he will earn $12.5MM over the first four years of the deal.