The Titans will not pick up Jack Conklin‘s 2020 option, a source tells Mike Florio of PFT (on Twitter). This was not necessarily the expected outcome for the former First-Team All-Pro. 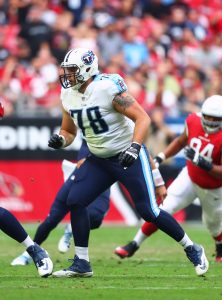 The 24-year-old (25 in August) started in every possible game in his first two seasons in the league. However, things turned a bit in the Titans’ divisional round loss to the Patriots following the 2017 season. Conklin’s torn ACL sidelined him for the offseason plus the first three games of 2018. Then, Conklin landed back on IR in December of last year.

In between the maladies, Conklin was not as sharp as his rookie self. Reading between the lines, it sounds as though the Titans have doubts about how well Conklin can recover from his knee injuries and concussions.

Last year, Conklin graded out as the 45th ranked tackle in the NFL, according to Pro Football Focus. That positions Conklin as a starting-caliber tackle, but not an elite one, making his would-be $12.866MM salary for 2020 a bit too rich for the Titans’ blood.