Nick Bosa has yet to sign his rookie contract and has run into more injury trouble, a grade 1 hamstring strain sidelining him for part of OTAs and the 49ers’ minicamp. The 49ers have run into a spate of injuries this year, with several carrying over from 2018. The team is not concerned about Bosa’s contract situation dragging into training camp like his older brother’s did three years ago and doesn’t appear fazed by the younger Bosa’s history (he missed most of his junior year due to a core muscle malady). 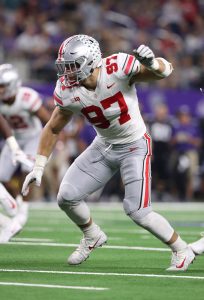 The team has been committed to the standout defensive end prospect since the Combine, with Matt Maiocco of NBC Sports Bay Area reporting 49ers executive VP of football operations Paraag Maranthe telling Bosa’s agent in Indianapolis he would be the 49ers’ pick at No. 2 — provided the Cardinals did not take him first overall.

Like Joey Bosa‘s situation in 2016, offset language serves as one of this deal’s holdups, Maiocco adds. The other snag is how the money will be paid out. Nick Bosa’s slot price comes in at $33.55MM, and it will be fully guaranteed.

Nick Bosa-to-San Francisco seemed like one of the best bets in this draft. Had the 49ers not taken Bosa, it was reported the Jets would have selected him at No. 3. The 49ers have not featured an edge rusher record a seven sacks in a season since Aldon Smith in 2013. They now have Bosa and Dee Ford in a pass rush mix that still includes the three interior rusher types chosen in the first round from 2015-17 — Arik Armstead, DeForest Buckner, Solomon Thomas.

6 comments on “49ers Decided On Nick Bosa At Combine?”