The Bears have reached an agreement with third-round running back David Montgomery, according to Adam Schefter of ESPN.com (Twitter link). 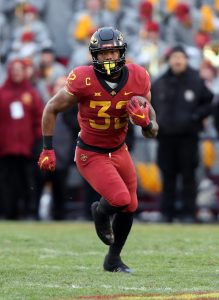 Chicago traded up to acquire Montgomery, sending three picks (including a 2020 fourth-rounder) to New England in exchange for the 73rd overall selection. The Bears didn’t have a first- or second-round pick in the 2019 draft as a result of the Khalil Mack trade and a 2018 draft-day swap with (again with the Patriots), so Montgomery represented the club’s first selection.

Having already shipped Jordan Howard to the Eagles, the Bears were searching for another back to team with free agent signee Mike Davis and holdover Tarik Cohen. Howard handled roughly 58% of Chicago’s running back snaps and 55% of the team’s rushing attempts a season ago, and head coach Matt Nagy will now be tasked with divvying up touches among three backs.

Montgomery (5’10”, 222 pounds) topped 1,100 yards rushing in each of his final two seasons at Iowa State. While he didn’t produce elite athletic testing results at the combine, Montgomery finished the 2018 campaign with the most missed tackles forced (99) of any collegiate running back, as Ben Cooper of Pro Football Focus writes.