The Buccaneers have signed third-round safety Mike Edwards to his rookie deal, according to a team announcement. Per the terms of his slot, the four-year pact should be worth $3.34MM with an $822K signing bonus. 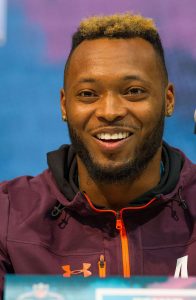 Taken with the No. 99 overall pick, Edwards could be in line for a starting role at safety this year. Even if he doesn’t make the first-string squad, he figures to see a decent amount of playing time in the secondary.

At Kentucky, Edwards proved his effectiveness at multiple positions. In total, he racked up 318 tackles, the second-highest total in school history among defensive backs. He also had a nose for the football with the Wildcats, notching ten career interceptions, including two pick-sixes.