Ravens Were Out Early On Za’Darius Smith

The Ravens for years have let edge rushers test the market, with several of those processes ending in the franchise recouping mid-round compensatory picks after contract-year standouts departed. They did not deviate from this formula this offseason. 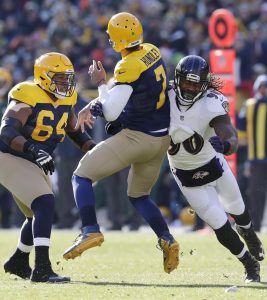 But as a result of both Terrell Suggs and Za’Darius Smith leaving this year, the team is thinner than usual at this premier position. As for Smith, the Ravens were never in the mix to bring him back, Jeff Zreibec of The Athletic notes (subscription required).

Smith signed with the Packers on a four-year, $66.5MM contract; the former part-time Ravens starter is now the NFL’s third-highest-paid 3-4 outside linebacker. Ravens GM Eric DeCosta seemed to predict Smith’s exit in January, noting how the market escalates for this type of young talent, and Zreibec notes the Ravens did not want to compete with that cost. Smith registered 8.5 sacks and 25 quarterback hits last season and followed previous Baltimore walk-year standouts like Paul Kruger and Pernell McPhee in signing big deals elsewhere.

McPhee is now back in Baltimore, with he, Shane Ray, third-round pick Jaylon Ferguson and returning starter Matt Judon comprising the Ravens’ edge-rushing contingent. Judon has yet to say if he and the Ravens have discussed an extension. In terms of young edge defenders potentially set for next year’s market, Judon (15 sacks over the past two seasons) joins Yannick Ngakoue, Bud Dupree and Dante Fowler among those in contract years.