As expected, Melvin Gordon will not be on hand for training camp (Twitter link via ESPN.com’s Adam Schefter). Gordon, of course, is holding out in an effort to land a lucrative new deal. 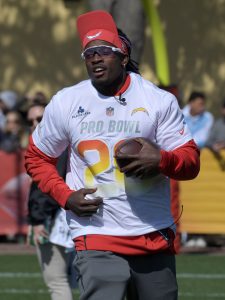 For each day that Gordon misses in training camp, the Chargers can fine him up to $40K. It’s a major risk and a major blow to his bank account, but in Gordon’s estimation, it’s worthwhile.

When looking at the history of running backs in the NFL – and their injury history in particular – Gordon’s push for financial security makes plenty of sense. Granted, running back holdouts don’t necessarily pay off. Le’Veon Bell famously skipped the 2018 season in an effort to preserve his body and reach free agency riches, but his four-year, $52MM deal with the Jets fell shy of his asking price.

This week, we heard that the Chargers have not budged in talks. Gordon, meanwhile, has expressed a desire to stay with the Chargers for the long haul.