The Bears are one of only a few NFL teams projected to bring back their entire starting offensive line in 2019, and with good reason: the unit was extremely effective at pass-blocking last season. Chicago’s front five gave up just 33 sacks (tied for eighth in the league), and ranked seventh in the NFL in adjusted sack rate. 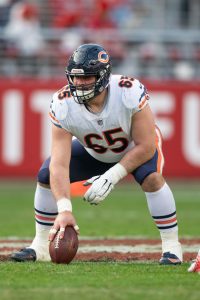 Cody Whitehair has been a key factor in the Bear’s offensive line success over the past three seasons, but despite earning a Pro Bowl nod in 2018, he’ll be asked to change positions next year. Chicago plans to insert 2018 second-round pick James Daniels at center, meaning Whitehair will need to shift to left guard.

Whitehair has experience moving between positions. At Kansas State, the now-26-year-old spent his first two seasons at guard before moving to tackle for his junior and senior campaigns. In the NFL, Whitehair has mostly stuck at center, although he did line up at both guard positions for a bit in 2018. The results have mostly been spectacular, as Whitehair graded as a top-10 center last season while ranking top-six in pressures allowed (min. 50% playtime), per Pro Football Focus.

Now entering the final year of his rookie contract, Whitehair and his representation are now likely looking for an extension. Chicago’s front office, historically, has been more than willing to pay up for offensive line talent. Right guard Kyle Long inked a four-year, $40MM extension in 2016, left tackle Charles Leno received a four-year, $38MM deal in 2017, and right tackle Bobby Massie re-signed on a four-year, $32MM pact earlier this year.

But how will the Bears approach negotiations? Will they view (and pay) Whitehair as a center or a left guard? It’s a critical question, because there a pretty wide gap in top salaries between the two positions. The top of the left guard market reached $13.3MM per year when Andrew Norwell signed a massive contract with the Jaguars in 2017. The center market, however, only hit $11.125MM annually this past offseason thanks to Mitch Morse‘s deal with the Bills.

Whitehair could potentially bet on himself, hoping that he posts another stellar season before cashing in as a left guard — potentially at $14MM or more per year — in 2020. Chicago isn’t likely to use its franchise tag on a guard, especially given that franchise tenders for offensive linemen don’t differentiate between guard and tackle. Therefore, Whitehair really only has to worry about the prospect of an injury tanking his value.

Alternatively, Whitehair and the Bears could split the difference between guard and center salaries and agree to a deal in the $12MM/year range. He’d be making more than any center, but come out just shy of Norwell’s pact with Jacksonville. At present, it’s unclear if Whitehair is willing to trade some of his contractual upside for financial security, but it could be a deal that would satisfy both he and the Bears.