Jadeveon Clowney Won’t Get Extension From Texans, Will Play 2019 Under Franchise Tag

Jadeveon Clowney won’t be getting an extension from the Texans. The two sides aren’t going to get a deal done before the July 15th deadline, sources told Aaron Wilson of the Houston Chronicle (Twitter link). 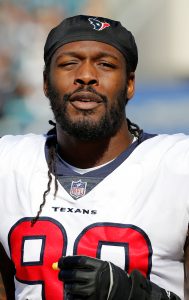 That means that Clowney, the first overall pick back in 2014, will play the 2019 season under the franchise tag. The deadline for franchised players to get a new deal is in less than a week, and we hadn’t heard of much progress between the two sides, so this isn’t too shocking. While pushing for a new deal Clowney has been staying away from the team, and he didn’t attend the team’s mandatory minicamp last month.

Wilson reports that Clowney is “not expected to miss any games, but likely to miss at least a major portion of camp.” Clowney clearly isn’t too happy to be playing under the tag, and it sounds like he won’t be showing up until the last minute. After the Texans fired GM Brian Gaine, there were reports that his handling of the Clowney situation contributed to his firing.

The Texans are now in the unique situation of operating without a general manager. After they fired Gaine, they failed in their attempt to lure away Nick Caserio from the Patriots after New England filed tampering charges. Caserio’s contract is up after the 2020 draft, and the Texans are widely expected to make another run at him then. It’s possible that a new front office could be able to soothe things over with Clowney, but free agency will have come and gone by the time Caserio is out of his Patriots contract.

As of right now, it seems highly possible that this will be Clowney’s last season in a Texans uniform. Clowney has played very well, making the Pro Bowl each of the last three seasons, but Houston seems reluctant to reset the market and break the bank for him. In 15 games last year, Clowney had nine sacks, 16 tackles for loss, and three fumble recoveries.

6 comments on “Jadeveon Clowney Won’t Get Extension From Texans, Will Play 2019 Under Franchise Tag”