Bad news for the Broncos, as it turns out they suffered a second significant injury in their preseason game last night. Starting fullback Andy Janovich has a pec injury that will sideline him six-to-eight weeks, sources told Mike Klis of Denver 9 News. 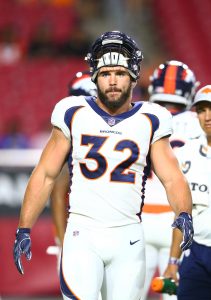 We had heard earlier this morning that rookie tight end Austin Fort tore his ACL and would miss the entire year. Even though Janovich will miss some regular season time, the Broncos are breathing a sigh of relief. According to Klis, the team initially thought Janovich was going to be done for the season, and the team says news of the pec strain is “better than we expected.”

The only other fullback on the roster is George Aston, an undrafted rookie from Pittsburgh, and Klis seems to think the team will do something to address the position before Janovich gets back. Janovich has become a fan favorite in Denver the past few seasons, and he’s been playing a big role. Last season he played just over 22 percent of the offensive snaps, and over 61 percent of the special teams snaps.

As for Fort, Klis writes that he “had been among the Broncos’ most pleasant offseason surprises,” so it’s an especially tough blow. The Broncos played in the Hall of Fame Game last week and also suffered two serious injuries, as defensive lineman Billy Winn was lost with a season ending triceps injury and special teams standout linebacker Joe Jones will miss six-to-eight weeks with a triceps injury of his own.