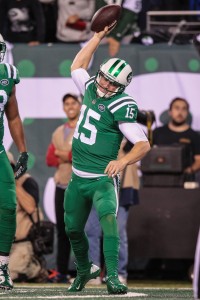 Philadelphia entered the preseason with Nate Sudfeld and Cody Kessler competing for the No. 2 spot on the QB depth chart. Sudfeld broke his wrist during the team’s first preseason game while Kessler suffered a concussion during their second preseason contest. The franchise also has fifth-round pick Clayton Thorson on the squad. The rookie completed 16-of-26 passes for 175 yards and a touchdown in extended play vs. the Jaguars on Thursday.

Sudfeld is expected to return this season and his roster spot seems secure. Kessler’s future with the team is less certain with the McCown signing and it’s hard to envision a scenario where Thorson is on the squad come week 1.

With Nick Foles departing this offseason, the Eagles lacked a strong option at the back-up QB position. McCown, who spent the last two seasons with the Jets, will provide Philadelphia with a solid veteran who is capable of a spot start or two if needed.

McCown announced his retirement this offseason and was pursing a broadcasting career with ESPN. He’ll resume that career next year after serving as an insurance policy of sorts for Carson Wentz in Philadelphia this upcoming season.

McCown’s contract will be a one-year deal with a $2MM base salary that is fully guaranteed, NFL.com’s Ian Rapoport tweets. Tom Pelissero of NFL.com (Twitter link) hears that the deal could be worth as much as $5.4MM with incentives.

The Eagles will be the 40-year-old’s 10th team of his 17-year career. He spent the last two seasons with the Jets where he appeared in 17 contests for the club. McCown also previously spent time in the UFL, where he played for the Hartford Colonials.